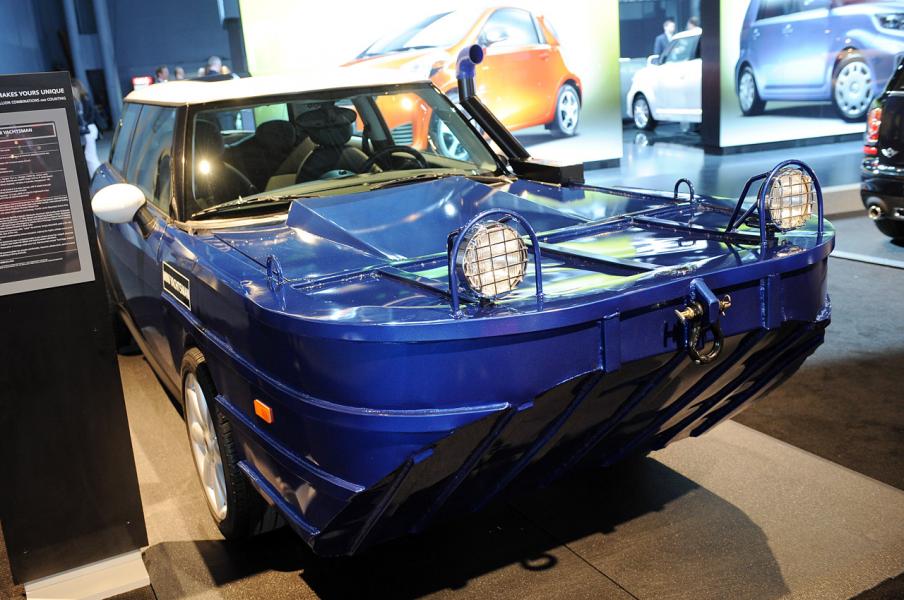 What you sea is what you get. Flytväst på, här har vi releasen som avslöjar alla detaljer:

Woodcliff Lake, NJ – April 1, 2012... MINI customers will be able to boldly go where no motorer has gone before when the all-new MINI Cooper Yachtsman makes its world premiere at the New York International Auto Show next week, right beside the Hudson River.

Designed to bring MINI ownership to people who regard the 70 percent of the earth's surface covered by water as their home, the new MINI Cooper Yachtsman is a corner-carving crustacean that promises go-kart-like handling and a sensational combination of amphibious* and landphibious performance both on and off the water.


Certain to be as popular in New York harbor as it will be at the Jumeira Palm marina or Monte Carlo harbor, the MINI Cooper Yachtsman is fitted with a shark-resistant undercoating as standard, and can carve through water at speeds up to 61 knots, while promising an equally rewarding driving (but not diving...) experience – on-road or off-land.

"Our exciting MINI Cooper Yachtsman is the ultimate extension of the MINI brand, expanding our line-up to seven models in the USA and offering consumers even more ways to enjoy MINI ownership in a manner best-suited to their individual taste and location," comments Jim McDowell, Vice President of MINI USA.

"The Yachtsman will become an instant status symbol, a car/boat combo that evokes 'land/sea envy' in equal measure. Originally endorsed by the British Royal Navy**, the Yachtsman brings a new level of versatility to MINI ownership. So, if you're cruising along and someone yells 'Lake' – no worries. Simply downshift, grab a life-vest, hit the water and let Yachtsman take care of the rest!" adds McDowell.

Showroom appeal of the MINI Cooper Yachtsman is matched by dockside allure as the 169.8 inch long craft sports Reef Blue metallic paintwork contrasting with silver alloy wheels and matching silver rudder. The exhaust snorkel is finished in body color and the extendable rooftop antenna comes with a 'get-you-home' 20-ft white sail (in case of emergency) which can be deployed for zero-emissions sailing.

With room to sleep two people, the cabin features waterproof rip-stop upholstery, seat cushions which double as flotation devices, and a Marine Chronometer for celestial navigation in the event of a sat-nav glitch. For junior 'sailors', the glove box holds MINI-branded water wings, a pirate flag and eye patch.

Standard equipment features a six-foot marlin rod with roller guides, an international trolling reel with 130-lb test line and (on the port side) the latest MINI safety technology – FLOAT (the Frantic Lever Operated Active Trim) adjuster. On the starboard side there is a spring-loaded herring chucker.

In line with MINI's customizable nature, a full range of unique accessories for this latest addition to the MINI product line-up includes a Customizable Klaxon (choice of sea lion, porpoise, sperm whale, dolphin, seagull or mallard duck), and personalized Under-Hull Messaging – recommended factory fitted graphic options such as 'Suck eggs, Kraken' and 'Mermaid Magnet' are sure to be popular choices.

On sale from April 1st as a model year 2013 vehicle, the Yachtsman combines typical MINI driving and boating fun with the same discerning craftsmanship, select materials, styling and all-round 'typical British understatement' that are hallmarks of the world's leading boat builders.

For propulsion, each MINI Cooper Yachtsman is powered by a turbocharged 1.6-liter four-cylinder engine with a twin-scroll turbocharger, direct injection and variable valve control to generate 181 hp. Outdrive to the constant-pitch propeller is managed by a specially-fitted gearbox mounted mid-ship with six forward speeds. Although the new model weighs 4,600 lb (fully laden), the sprint from 0 to 60 mph is completed in 6.6 seconds (on land) and in 2.4 minutes (on water). Top speed (on land) is 141 mph.

Developed after extensive testing of punt prototypes on the River Isis (near MINI's manufacturing facility in Oxford, England) and in the deep waters off Greenland (where The Kraken of legend lurks), the MINI Cooper Yachtsman is priced at US $236,000 and comes with a fully incomprehensible warranty that includes 3-year no-cost moorage, annual dry-docking and free barnacle removal, for the original captain.

You can see the MINI Cooper Yachtsman on the MINI Stand at the New York International Auto Show in the Jacob Javits Center from Wednesday April 4th.